Today I am going to complain about my daughter. Because I have such a naughty one.

She never stands in one place, not even for a second. She never plays by herself. She doesn’t like to be told what to do. When I need her to do something , she forces me to make a hundred explanations. If she makes sense of it, she listens to me. If not, she asks a hundred more questions.

She doesn’t even let me speak on the phone, let alone meet friends. I am not allowed to pay attention to someone other than herself. Even the guests should only pay attention to her, because if not, a temper tantrum is in order.

That is not even the beginning of my p2roblems. I am not allowed to relax a bit even when she sleeps. My little monster wants me to stay in her room until she falls asleep. If I don’t, she won’t sleep. And when I stay, it takes her like 2 or 3 hours to sleep. She wakes up to check up on me every two hours.
The other day we dressed up, and we were meaning to go out to run some errands. She wanted to bring her huge pony toy. I did not let her of course, because all the toys she takes with her end up with me carrying them back home with a scowl. And I did not feel like carrying it with all the other shopping bags.

Of course hell broke loose: tears and slamming doors : a huge crisis and somehow she managed to lock herself up in her room.
And none of the keys in our key closet fit the door. 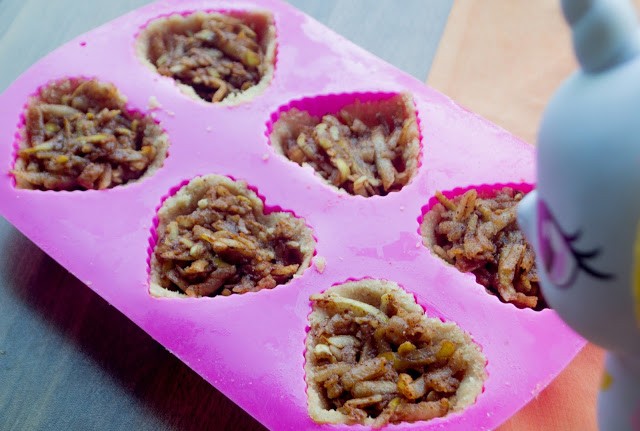 With the fear of her having a hypoglycemia all by herself, locked up in,  I panicked. I kept punching the door and nearly broke a finger. My hand swelled up and became purple in like 10 seconds. And then, with a sudden inspiration I grabbed a hammer from my husband’s tool bag and started slamming the lock with it. Just like Jack Nicholson from The Shining!
The lock broke. But the door still did not open. I started crying. But then I -finally- thought of asking for help from our security. And then, the happy end. The door opened up with one hard kick and Miss Bade was saved.
“How did you lock the door?” I asked her later. “It happened by accident mommy. My cheek touched it.” was her reply.  All is forgotten now of course: only these pies and this now-funny story remain from that day. And of course Bade’s room’s door needs to be replaced too. 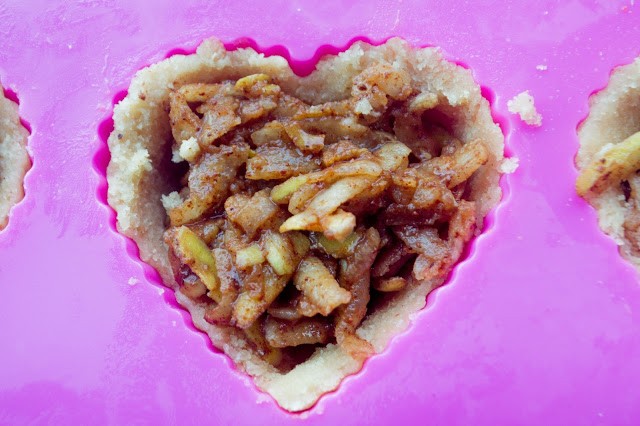 Ingredients: (For 6 mini pies)
For the base
1 cup almond/hazelnut meal
1 cup unsweetened shredded coconut
1 medium egg
1 tblspn olive oil
2-3 drops vanilla extract (optional)
1-2 tblspns of honey/molasses or any other natural swetener you like
1 pinch of salt (optional)
For the filling
2 small pears (shredded)
1 tspn cinnamon
Instructions:
Mix all base ingredients in a deep bowl and you will end up with a slightly sticky dough. Split and press the dough into silicone molds with your fingers, the middle of the molds will have be empty. Mix cinnamon and pears. Split them inside the molds. Bake for 25 minutes in a pre-heated 150C oven. Enjoy. 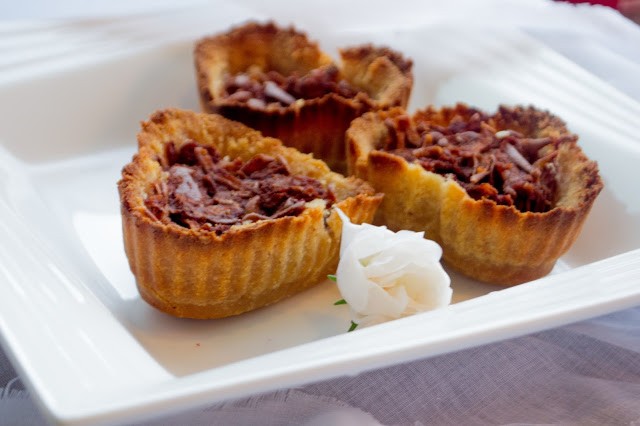